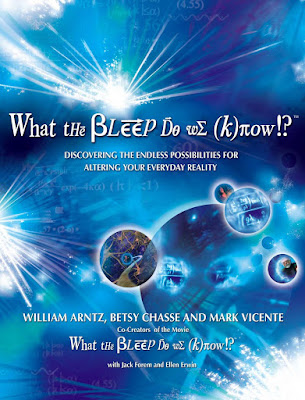 Our Conscious Movie-of-the-Month exploration for June 2019 is What the Bleep Do We Know (2004). This month we have a special treat for all us conscious media creators and fans, one of the filmmakers who worked on the film, our very own Betsy Chasse, will be joining us in our exploration along with some potential surprise guests from the production team, sharing some of their behind the scenes experiences and perspectives on the film with us both online during the month and in our virtual chat at the end of the month (date and time to be announced).

You are invited to watch What the Bleep Do We Know on your own and feel free to share your thoughts, reflections, musings and questions about the film in our group’s online discussion forum.

We chose What the Bleep Do We Know because it is considered by many to be a landmark work in the conscious media movement, being one of the very first movies about consciousness to penetrate the mass market. It was also groundbreaking in terms of visually capturing patterns of consciousness itself and creating what is now called the hybrid documentary style, integrating interviews with both compelling narrative and powerful visual storytelling.

This film was also created during the transition between analogue and digital filmmaking and was one of the first films to tap into the cultural creative field of consciousness. Because of this the film was traversing two major evolutionary convergence streams, technological and cultural, and is a great example of a work that was in synchronicity with the zeitgeist edge of the evolution of consciousness. We are blessed to have the opportunity to hear from the filmmakers themselves about what it was like to create a work at this leading edge, and while What the Bleep Do We Know is not an integral film, all of this makes it is a fascinating case study from an integral-evolutionary perspective.