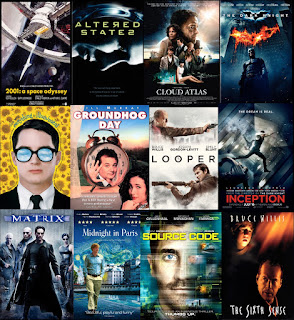 Join us for INTEGRAL GOES TO THE MOVIES, an evening of movie clips, popcorn, and some serious fun with Integral film theorist, filmmaker, and media psychologist Mark Allan Kaplan.

Using various movie clips Mark will show us how to be a savvy spotter of Integral trends in popular media and deepen our understanding of the ways current media and technologies are helping to transition us into an Integral Age.

Mark will unpack how films as diverse as Groundhog Day and Inception, and TV shows like Lost and Sense8, map the evolution of consciousness. You will...


Going to the movies usually isn't a solo affair so we set a special price for couples. So bring a friend or a date for a fun and stimulating evening of pop culture.

And, yes, we really will provide popcorn...


Click here to find out more and sign up for
INTEGRAL GOES TO THE MOVIES
with Mark Allan Kaplan
Wednesday, March 16, 7:00 to 9:30pm
in Berkeley, California

Posted by markallankaplan at 10:23 PM No comments:

The Integral Movie and TV List has been updated and is available on Internet Movie Database (IMDb) at: http://www.imdb.com/list/ls074613980/.

On the list you will find all the movies and television series that have tested positive for having integrally-informed elements to varying degrees according to testing criteria developed during research on the application of Integral Theory to cinematic media theory and practice.

According to this research, a cinematic work is deemed to be integral if elements of the integral stage of development are represented in the cinematic form, style, structure, content, and/or are embedded in the material as a presence or atmosphere. These representations of the elements of the integral stage of development can include: The exploration and integration of multiple evolving dimensions and perspectives of lesser and greater depth and span; the concretion of abstract and interior dimensions and perspectives, such as time and interiority, in the service of evolutionary growth and development; an evolutionary story, event, and/or character progression that is given greater than or equal emphasis to conflict resolution, with progression developing vertically through at least three stages or levels of development; the evolutionary impulse as a driving force or causality pattern; the valuing of truth that is qualified by evolving perspectival fields; and/or a Kosmo-centric circle of care and concern that suggests an awareness, integration, and embracing of all of existence.

Recent updates to the list include the following titles:


Citizen Kane (1941) - This cinematic masterpiece has hints of the emergence of integral cinematic style and structure into a more main stream form as it traces the evolution of an individual life and explores how our primal wound can both propel us up the ladder of human development while also undermining and regressing us at the same time. While the film's main character falls far short of the higher stages of development, the filmmaker, Orson Welles, potentially elevates us the audience into a higher level of perception as we are cinematically raised up into the integral dimensions of a deeply integrating and witnessing consciousness.

It's Such a Beautiful Day (2012) - Beautiful animated trilogy of shorts that explores the journey of an individual life that dances across the thin line between life and death, time and timelessness, and form and the formless. The film is both raw and elegant and wondrously captures the main character's evolutionary dance from egocentric (self-absorbed) to Kosmocentric (unitive) levels of existence.

The Giver (2014) - A heart-felt integrally-informed psycho-social science fiction film that dramatically explores a post-catastrophe society that has tried to engineer a better world by suppressing the human shadow and de-evolutionary forces from the developmental arc. This suppression ends up also  burying many positive and higher emotions and the heart of the evolutionary impulse itself, and an old man who holds the memories of what the world lost gives a young man those memories in hopes of helping him evolve into the catalyst for the re-awakening of the heart and soul of the world.

Share (2014) - "Share" is a subtle and elegant integrally-informed dramatic short film exploring the impact of transcending the boundaries between subjective and intersubjective domains across multiple dimensions of being and becoming. The film's creator is a long time student of Integral Theory and one of the early integral practitioner's who have been attempting to apply Ken Wilber's Integral theories to media.

The Cobbler (2015) A deeply flawed but cute mystical comedy with an integrally-informed undercurrent of the main characters evolution from egocentric to Kosmocentric circles of care and concern.


Avatar: The Last Airbender (2005-2008) Wonderful and deep yet light-hearted integrally-informed animated TV series that explores the evolving and spiraling dance between the separation and the union of the multiple dimensions of our being and becoming.

The Legend of Korra (2012-2014) - Another integrally-informed animated TV series from the creators of Avatar: The Last Airbender, set in the Avatar universe many years later with a new, this time female, Avatar, expanding and deepening their exploration of the evolving and spiraling dance between the separation and the union of the multiple dimensions of our being and becoming.


More movies and TV series are added to the list as more are tested so check back periodically to keep abreast of the research.


Posted by markallankaplan at 10:15 PM No comments: