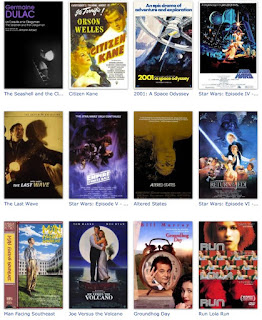 The Integral Movie and TV List has been updated and is available on Internet Movie Database (IMDb) at:http://www.imdb.com/list/ls074613980/.
On the list you will find all the movies and television series that have tested positive for having integrally-informed elements to varying degrees according to testing criteria developed during research on the application of Integral Theory to cinematic media theory and practice.
According to this research, a cinematic work is deemed to be integral if elements of the integral stage of development are represented in the cinematic form, style, structure, content, and/or are embedded in the material as a presence or atmosphere. These representations of the elements of the integral stage of development can include: The exploration and integration of multiple evolving dimensions and perspectives of lesser and greater depth and span; the concretion of abstract and interior dimensions and perspectives, such as time and interiority, in the service of evolutionary growth and development; an evolutionary story, event, and/or character progression that is given greater than or equal emphasis to conflict resolution, with progression developing vertically through at least three stages or levels of development; the evolutionary impulse as a driving force or causality pattern; the valuing of truth that is qualified by evolving perspectival fields; and/or a Kosmo-centric circle of care and concern that suggests an awareness, integration, and embracing of all of existence.
Recent updates to the list include the following titles:


The Star Wars Saga 1-9 (1977--): When taken as a whole and in their intended narrative order, the first 6 Star Wars films show a full evolutionary and de-evolutionary arc for the character of Anakin Skywalker, aka Darth Vader, from egocentric to Kosmocentric with dark twisting turns and de-evolutionary undercurrents of the deep shadow creating a complex spiral of evolutionary development for the character and the archetypal forces represented by him and his journey. The evolutionary arc of the Skywalker dynasty continues with a second major tetra-evolutionary cycle (inner and outer selves, cultures and systemic forces) following Luke and Leah Skywalker and their world through their evolutionary arc, starting with "Star Wars IV - A New Hope" (1977) through "Star Wars VII - The Force Awakens" (2015) and beyond…projected to be completed with Star Wars IX. For more on this check out the "Unpacking Star Wars 1-7" podcast at: https://youtu.be/_pQ1oz2-ppY

The Last Wave (1977): A haunting mystical cinematic journey into the heart of aboriginal dreamtime and its evolutionary impact on a non-aboriginal person and the greater world at the crossroads of a great awakening (Australia).

Run Lola Run (1998): A fun and wild ride using a temporal loop to take us and the main character on an inner and outer evolutionary journey with great heart and a lightness of being that playfully holds a deeper meaning (Germany)

Star Trek 2009, Star Trek into Darkness and Star Trek Beyond (2009-2016): The rebooted Star Trek trilogy is a beautiful cross-temporal inner and outer evolutionary adventure following the developmental arc of both the young Kirk and Spock that creates both a complete evolutionary cycle through the three films and sets up for another cycle in upcoming films.

More movies and TV series are added to the list as more are tested so check back periodically to keep abreast of the research.

Posted by markallankaplan at 6:00 AM