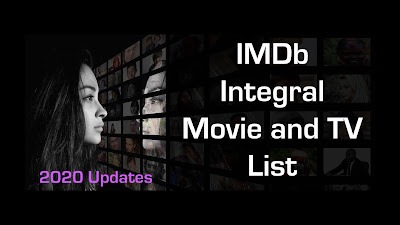 The following are all the movies and television and streaming series that were tested and added to the Integral Movie and TV List on IMDb in 2020 (listed chronologically by release date):

It's a Wonderful Life (1947) - This Frank Capra Christmas classic is also an early stage integral work that maps how the main character George Bailey (James Stewart) evolves from egocentric to Kosmocentric circles of care and concern in a way that shows us how we can evolve through various stages while also holding onto earlier stage drives and projections. In George's case he holds onto his childhood egoic dream of being a world explorer and doing great and big things, all the while not realizing that he was already doing great and big things as he developed throughout his life. A beautiful journey that teaches us that it is often the little things we do in life that end up having the biggest impact in the long run.  The film is also told directly from the Kosmocentric witness perspective from the angels watching over him beyond the dimension of the world of form.

Miracle on 34th Street (1947) - The quintessential Santa Claus movie of all time, this Christmas classic is perhaps the most magical Santa movie ever and yet it shows no magic directly. The miracles that Santa brings are miracles of consciousness. He is operating at a higher more integral level than everyone else and is able to see how they are trapped in their worldviews and constructs and he gently awakens them to higher dimensions of being and becoming. He is also very human in many ways, sometimes losing his faith that he can save Christmas, which only adds great depth to the wonderful performance by Edmund Gwenn. At the end we get a hint that this man may indeed be Santa Claus, but we are left with only a sense of standing at the edge of a great Kosmic mystery.

Rashomon (1950) - Profound cinematic masterpiece that puts the viewer in the integral witnessing state of being as the film deconstructs relativism and deconstructionism itself, making the pluralistic structure an object of our awareness and thus helping us to transcend it.

8 1/2 (1963) - Master Italian filmmaker Federico Fellini's semi-autobiographical cinematic masterpiece is actually a deep integrally-informed exploration of the artists struggle to tap into and be a channel for the creative force of the universe. Fellini's main character is a famous filmmaker who is in preproduction of  a film while being unable to access that creative force. His dreams help him seek for it in the past, in waking life the dreams bleed through and take him on a surreal creative journey to gaining that Kosmocentric witness perspective that feeds the artist's soul.

Local Hero (1983) - A magical little integrally-informed off-beat comedy that gradually has us feeling that everything we are seeing in this cinematic reality is at the edge of a vast conscious mystery, giving us a gentle and subtle taste of the Kosmocentric realities beyond the veil of what is known. This veil includes the separation between the manmade world we live in and the natural world we are cut off from as well as the great mystery beyond the stars.  Amidst all this, our main character evolves from egocentric to the early beginnings of  Kosmocentric circles of care and concern in an almost imperceptible way. Everything here is just below and beyond the surface, just beyond our grasp.

Field of Dreams (1989) - This magical film classic explores the healing of shadow material for individuals at various stages of development as they come in contact with the transcendent reality of the Field of Dreams itself. Through this journey we are taken to the edge of what can be known and hints at what is beyond, giving us a taste of the Kosmocentric Integral Witness.

I.Q. (1994) - A sweet little integrally informed romantic comedy that explores Einstein's famous idea that God does not play dice with the universe and applies it to love. The characters and the story subtly  dance  between our reality and hints of that greater force behind it. This wondrous lightness around such deep and heavy concepts produces a beautiful and sweet and silly Kosmo-centric journey.

50 First Dates (2004) - An evolutionary time-loop Kosmic love story where the narrative actually takes us through different circles of care and concern as the main character evolves through them. So we first start with the world as it evolves around him and his ego...then to a connection with another person, his love interest...who is stuck in her own personal 24 hour time-loop…then to her family...then to the greater community (the others at the brain institute) and finally the world at the end when he takes everyone with him as he does research for the planet and humanity itself. Pretty simple and fun movie that is at its heart essentially integral.

Eli Stone (2008): A funny, profound, deep and light integrally-informed series explores the neurological boundaries between brain and consciousness, between spirit and science, and between madness and mysticism. Eli Stone is also a hybrid genre work that beautifully integrates comedy, drama, and musical forms into a wondrously mystical legal procedural show. In the end this magical yet grounded work climaxes with a deep visceral existential experience of transcending the age old question between fate and free will by revealing a beautiful synergy between them.

Atlanta (2016) - An Integrally-informed series that finds hilarity in the absurd while unpacking the core traumas of being black in America. Creator & star Donald Glover (whose alter-ego Childish Gambino scored with the breakout hit This is America) plays Earn, a young Princeton dropout from a low-income neighborhood who begins to manage his cousin, a locally-famous rapper on the verge of breaking big. Atlanta unpacks how race intersects with every domain of society -- from the personal and interpersonal to the social and systemic -- and does so with a metamodern tone of plangent, loopy surreality.

Kevin (Probably) Saves the World (2017) - Fun off-beat comedy TV series with the main character Keven kicking and screaming his way through an integrally-informed transcendent education process. This process forces him to evolve through multiple stages of development on his way to fulfilling his destiny of saving the world…maybe…

WeRiseUP (2019) - Well-made conscious documentary seeks to empower us to rise to the great challenges we face as a species and meet this moment in history with deep passion. WeRiseUP goes deeper and more expansive than normal works in this genre by anchoring it in an integral framework.

Messiah (2020) - This complex and layered integrally-informed Netflix series unpacks the interrelationship of religion, consciousness, culture and society. This brilliant series seems to be consciously designed to bring more expansive awareness to viewers cross-culturally.

Star Trek: Picard (2020) - The sixth spin-off streaming series in the integrally-informed Star Trek universe is a sequel to the popular Next Generation series and feature films that finds an aging Captain Picard coming out of retirement for one last grand adventure that seeks to complete haunting unanswered questions and story arcs from the Next Generation storyworld.

Homemade (2020) - This Netflix short film series stitches together a bunch of shorts made by a crop of talented international filmmakers making films in and about quarantine. Together these shorts create a mosaic experience of the pandemic across the globe that gives us a sense of a bigger picture just beyond our reach. Truly beautiful, profound and deeply resonant and inspiring...and operating at the frothy edge of a new form of integrally-informed conscious media.

Palm Springs (2020) - An integrally-informed "Groundhog Day" evolutionary time-loop romantic comedy with two…or even three…or more…characters caught in a time-loop that is helping them all heal and evolve.

Tenet (2020) - Christopher Nolan's mind-bending time-twisting groundbreaking integral temporal cinematic work. Part spy movie, time-travel thriller where the future is at war with the present. Bullets going backwards and forward, people die in one time and come back to life in another, people in the past die in the future while people from the future die in the past. A truly wild temporal ride with the protagonist evolving through all the stages of development both in time and all at once. This film also has perhaps the cinema's first temporal war battle scene and becomes a visceral cinematic training in temporal field awareness.

Soul (2020) - A deeply moving, uplifting and transformative Pixar journey into the nature of human existence and the human soul. The main character evolves from an egocentric lost soul unable to see his relationships and the world around him beyond how they either help or hinder the fulfillment of his dreams of success to a Kosmocentric inspired soul, ultimately recognizing the depth and impact of his relationship with others and the world and the full transcendental beauty of all of existence itself. A journey deep into what it means to be human and what it means to be truly alive in all dimensions of sentient beingness.

The above movies and series have integrally-informed elements to varying degrees according to testing criteria developed during research on the application of Integral Theory to cinematic media theory and practice. According to this research, a cinematic work is deemed to be integral if elements of the integral stage of development are represented in the cinematic form, style, structure, content, and/or are embedded in the material as a presence or atmosphere. These representations of the elements of the integral stage of development can include:

Posted by markallankaplan at 11:02 PM