"The Social Dilemma" and the War on Consciousness (Media Shaman Studio) 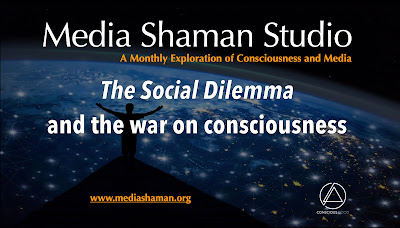 Featured Topic: Netflix’s new documentary The Social Dilemma (2020) and the war on consciousness.

There is a war on our consciousness. The main battlefield is the social media sphere. Our screens are the frontlines. The targets are our hearts and minds. There is no single enemy. Our freedom and democracy itself are at stake. The war is bleeding into our relationships and onto our streets. Many military historians and strategists believe we are in the middle of World War III. They speak of a new form of war called Nonlinear Warfare. This approach integrates advanced propaganda and social programming techniques with the weaponization of social media platforms, big data and A.I.. This form of warfare has been open-sourced, and nation states, corporate states, political parties and movements, splinter groups, subcultural groups and more are using it to vie for control and power by creating chaos, confusion and polarization in all dimensions of civilization. The other great World Wars included some nations, but not all. This war is covering the entire planet. Every human being in the world is a combatant. Is this the war to end all wars? Is there something more going on? Is this all part of the great transition in consciousness we are called to make during this Age of Transformation?

Join us this month as we begin our new Media Shaman Studio series with an exploration of this war on consciousness and it’s transformative potentials using Netflix’s new documentary The Social Dilemma (2020) as our leaping off point. This profoundly resonant documentary delves deeply into how the utopian dreams of those who helped create social media platforms have been shattered by its weaponization against the very ideals they were working toward.

If you have not seen The Social Dilemma you can stream it on Netflix. You are also invited to share your thoughts, reflections and musings about the film in the comments section below..

And of course join us on October 18th at 12 p.m. PST for our virtual discussion of the film, the war on consciousness it addresses, and how this all speaks to us at this moment in human history. As part of our virtual discussion we will be sharing a perception practice specifically designed to use this film for training us in the new emergent consciousness this war is calling us toward.

Media Shaman Studio is a monthly in-depth public lecture and discussion series on the relationship between consciousness and media with hosts and facilitators, Mark Allan Kaplan, Ph.D and Jonathan Steigman. This series is offered for free and is open to all members of the Conscious Good Creators Network, the general public, and participants in our Media Shaman courses.

If you have not already joined our FREE Media Shaman Studio group, you can still join us anytime by signing up for a free membership at the Conscious Good Creators Network.

Conscious Good Creators Network presents the Conscious Movie-of-the-Month Club with Integral Cinema Project Founder and Executive Director Mark Allan Kaplan, Ph.D., for anyone who wants to use media to raise individual and collective consciousness.
Watch the video replay of this event HERE.
Posted by markallankaplan at 9:36 PM