VOICE IN EXILE – The Powerful Award-Winning Classic Narrative Film Capturing the Experience of Stuttering – Is now available on DVD, Video On Demand, and Digital Download from Amazon.com at: http://www.amazon.com/Voice-Exile-Ben-Bottoms/dp/B00BJC8J9C/ 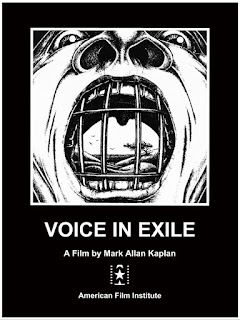 “VOICE IN EXILE is the first film on stuttering that tells the story from the inside with all the intensity and power of a real life experience...this is one hell of a film!” – John Harrison, The National Stuttering Association

“VOICE IN EXILE is among the most notable socio-dramas on the subject of people with physical challenges.” - Geoff Alexander, Academic Film Archive of North America

VOICE IN EXILE is an internationally acclaimed award-winning dramatic and archetypal film journey into the mind and emotions of Alan Woodward, a seventeen-year old stutterer, exploring the inner and outer trials, tribulations and fears that stutterer’s often endure. Because of Alan's stuttering, communicating the simplest idea is often impossible. Everywhere Alan goes he faces impatient people who do not understand his severe speech problem. At school, Alan faces snickers and stares that wound him. At night, the horrors of Alan's days invade his dreams, leaving him no peace in sleep. At home, Alan faces loving parents who share his frustration; yet, they are confused and often misguided in their efforts to help him overcome his stuttering. It is Alan's grandfather, a recently retired college professor, who seems to be the only one able to communicate with and help Alan embark on a journey of transformation that ultimately leads to the release of his imprisoned inner voice.

The writer/director of this powerful cinematic work, Mark Allan Kaplan, is himself a stutterer and this film is the culmination of Mark's deep personal quest to express the inner life of the stutterer through film. This quest for expression began with the writing of the script, during which Mark delved deeply into his own experiences and emotions as a stutter and tried to translate them into a dramatic story. The script was further developed with the additional input from interviews with other stutterers, while Mark worked with his committed cinematography, sound, and production design teams to translate the experiential reality of the stutterer into a visceral audiovisual language. Then Mark worked with the actor playing Alan, Ben Bottoms, on both the physical aspects of stuttering and the emotional underpinnings.

As a result of this passionate personal and collective effort, VOICE IN EXILE is a remarkably gripping film that touches viewers on many levels. On one level, it is about a young man's quest to conquer his stuttering. On another level, it is about the inner struggle of all those faced with physical and psychological challenges. On a broader and deeper level, the film speaks to all of us as it addresses a universal theme - the struggle to overcome one's legitimate and unfounded fears...fears that inhibit us, often with disastrous results. A Film By Mark Allan Kaplan Starring Ben Bottoms, Jesse Ehrlich, Richard Sarradet, and Sarah Simmons Produced at the American Film Institute Center for Advanced Film Studies

For more on VOICE IN EXILE visit www.voiceinexile.com

Posted by markallankaplan at 3:17 PM

Email ThisBlogThis!Share to TwitterShare to FacebookShare to Pinterest
Labels: Announcements, Films and Video