Star Wars and the Tetra-Evolution of American Cinema 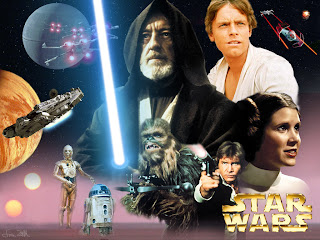 During my studies into the application of Integral Theory to cinematic media, I attempted to look at an evolutionary or unfolding display moment in Hollywood filmmaking history through the lens of the three Integral Methodological Pluralism (IMP) principles of Nonexclusion, Unfoldment, and Enactment. The evolutionary moment in Hollywood filmmaking history I chose was the making of the first Star Wars (1977). A film that, according to most members of the various Hollywood knowledge communities, revolutionized the creative, technical, business, and critical evaluation aspects of the industry.

Conflicts often arise between these communities, and their seemingly contrary social practices/injunctions and the constructs generated by them. In the case of the first Star Wars (1977), the Cinematic Business Community (every studio) turned down the script at least once, even though many of the executives personally loved it (UL). The reasoning behind their choice was that their marketing models (LR) clearly showed that a science fiction film could not be profitable. What they failed to see was that George Lucas had crafted a cinematic vision that would ultimately transform the paradigms and constructs of all four knowledge communities (see below).

Finally, one of the executives at 20th Century Fox, Alan Ladd, Jr., was able to join Lucas in ENACTING a different world by seeing the other dimensions of Lucas’ work (taking a leap of NONEXCLUSION), and by heroically putting his job on the line for the script (George Lucas, personal communication, 1978). In the end, the film shattered box office records, transformed Hollywood’s marketing models; saved Fox from bankruptcy, and gave Ladd and Lucas their own companies (LR). It created a new genre (trans-genre) within the cinematic lexicon (LL) by including many different genres (Science Fiction, Westerns, War Movies, Mythical Adventures, etc.) into a cohesive blend that transcended all of them (UNFOLDMENT). Stars Wars also helped usher in the return of mythology to American cinema and American culture (LL) by blending mythological archetypes with modern and postmodern story and thematic elements. Lucas and his technical team also managed to advance cinematic technology (UR), making it easier to translate the creative visions of cinematic artists (UL). The effect of Star Wars’ genre hybridization, techno-creative advancements, and rebirthing of mythic cinema on the cinematic audience was something the traditional business and marketing models could not prehend (LR).

For additional reflections on the elements and conditions which made Star Wars such a unique and profound phenomenon, see my previous post and comments: My Cinematic Structuralism Emancipation at Integral Life.

Posted by markallankaplan at 4:21 PM